Unlike it was a couple of years ago, Hashtags are now very much a norm in Sri Lanka.

While some hashtags do not make sense and some Sri Lankans still do not know how to hashtag correctly, there are several instances in Sri Lanka where hashtags created a buzz and started a conversation on social media.

Here are some hashtags related to Sri Lanka that dominated Twitter in the recent past.

The Wilpattu National Park was one of the recent topics of controversy in Sri Lanka, and social media did not fail to follow the cue. Several video clips recorded by various news channels displaying the deforestation that was going on were circulated via social media. There was also certain artwork circulated, as well as petitions to stop the deforestation. Not simply individuals but companies and brands also stepped up to protect one of Sri Lanka’s few remaining natural reserves. Although it may not have solved the problem, it raised awareness by whopping magnitudes and did influence the controlling/termination of the act. 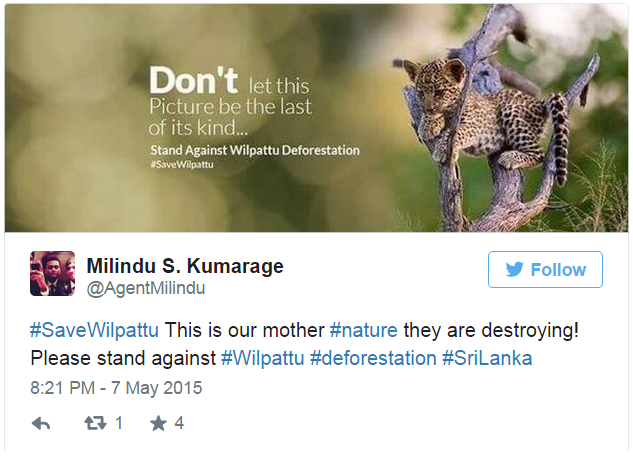 A very recent trending hashtag, this rose to popularity after a certain individual took a selfie with a police officer while he was been written a ticket for breaking road rules. While this was initiated by one individual and his friends (With the policeman writing the ticket in the background) this was soon imitated by others, and there were some cases where the police officers also posed for the selfie – shortened as “Polfie”

Gossip Lanka claims: “The motive is to get some satisfaction by informing their friends that they had been subjected to a fine.” 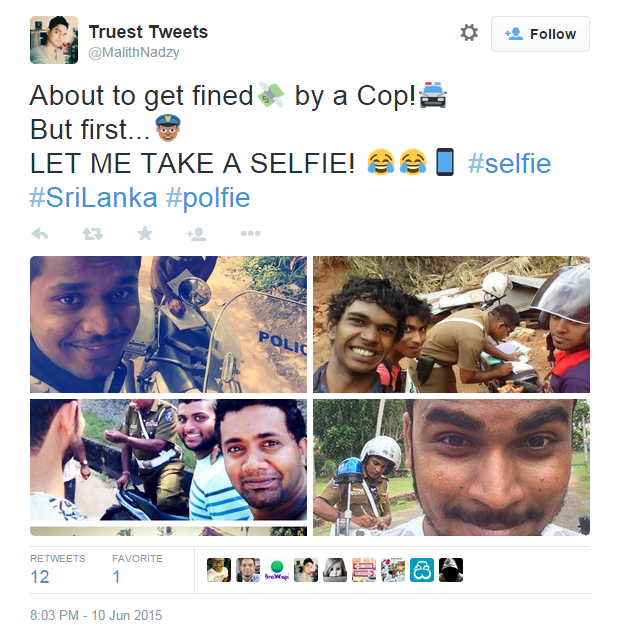 Mashable’s social media day (organized in Sri Lanka by Etisalat) is an annual occurrence in several countries and is now a highly anticipated event in Sri Lanka as well since it launched in 2012. The event, which does not charge participants for entry, but assess applicants and send them invitations. The hype around the event is mainly because most of the attendees are youth, and there are free giveaways, photo booths and guest appearances from Sri Lankan celebrities. The hashtag #SMDayCMB starts trending on Twitter from the time the organizers start their promotions for the events, and is very high on the day of the event, since questions asked at the event are also monitored through tweets. Post-event also there is a considerable hype around the hashtag for a good week after the event 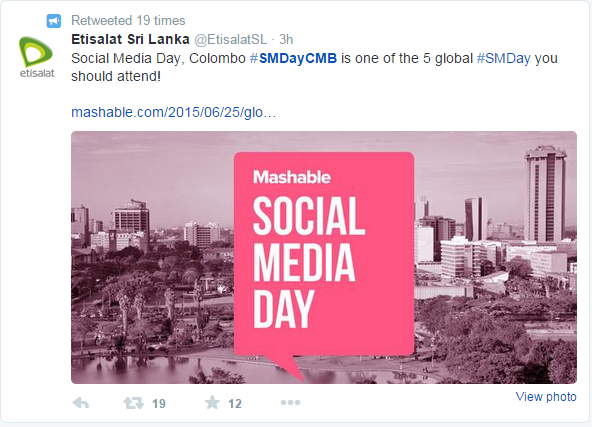 It is safe to say that Sri Lanka is well known worldwide for its Cricket. Sri Lankans from birth, irrespective of gender or social status, have a great interest in cricket. So it’s only natural that they express themselves in their outlet – social media! #CWC15 was a popular hashtag during the 2015 Cricket World Cup but hashtags such #LionsRoar #SLFTW, etc. are popular throughout. Further, for each match that Sri Lanka faces, there is a hashtag with the initials of the two countries, for example, #SLvsInd #SLvsPak, etc. This even extends to the Annual Indian Premier League (IPL), which is also a popular cricket tournament among Sri Lankans. Hashtags such as #KKRvsMI #RCBvsCSK are seen to be used during these times. 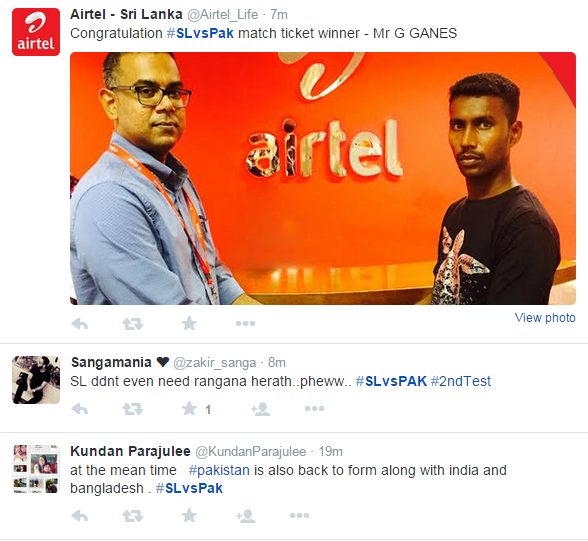 Unofficially termed as Sri Lanka’s first “Cyber Election”, the Presidential Election that took place in Sri Lanka in January was one for the books. Unlike any other election that took place before, this election saw the heavy involvement and influence of social media. This was further confirmed when the elected President, post-election, expressed his gratitude to the multitude that supported him online. Sri Lankans, irrespective of age, gender, social status or education levels, were very actively involved in expressing their viewpoints on the contenders and the incidents that took place during the campaign. Apart from the main hashtag #PresPollSL, #MRvsMS and #Yahapalanaya, there were some other hashtags such as #IWillVote and #IVotedSL that encouraged people to cast their vote. 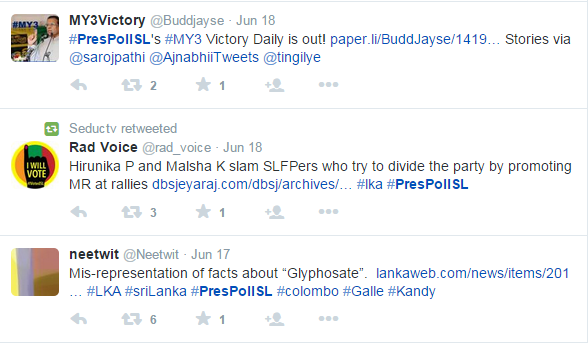 #SriLanka is commonly used for tweets related to Sri Lanka or Sri Lankans. Although this may seem obvious, #SriLanka and #LKA are popular mostly due to the robotic Twitter profile @SiripalaBot that retweets any tweet that contains those hashtags. So apart from the obvious reason of mentioning Sri Lanka, these hashtags are used to reach @SiripalaBot’s Twitter follower base. 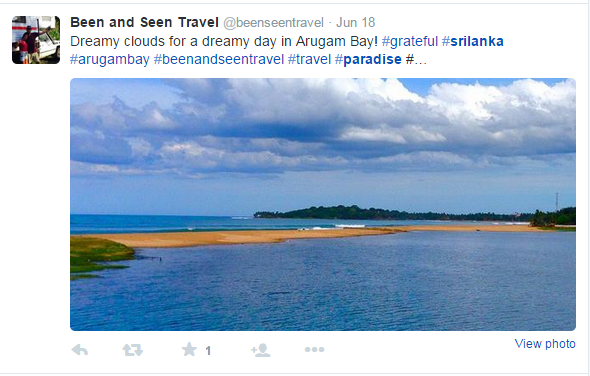 “Aiyo Salli” is an informal phrase used by Sri Lankans when they see/experience something disturbing or that they regret. This has become a very common phrase not only in speech, but also on social media. There are individual profiles on Twitter and Facebook with their name as Aiyo Salli, and it is a very common hashtag that appears on Twitter on nearly a daily basis. Although there is no real context to this phrase, its popularity is without doubt.

Hashtags that express Sri Lanka as a tourist destination are also quite common on Twitter (as well as on Facebook and Instagram). These are used not just by tourists but also by locals. While there’s a wide variety of hashtags, their occurrence on social media is only increasing, with the increasing number of tourists that come into the country. Some of these variations are: #TravelLK #AdventureSL #SLTourism #RoadToSriLanka #NightLifeCMB 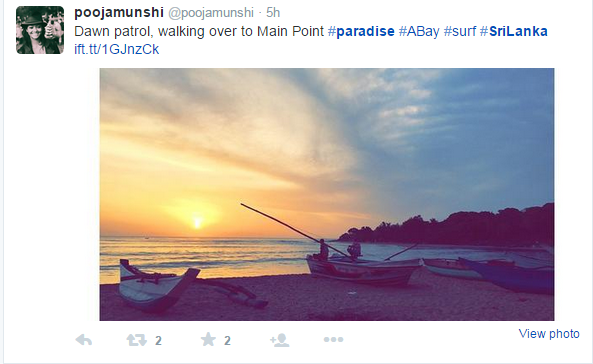 The 19th Amendment is nothing new to any Sri Lankan, who has been following the political news in the past few months. This was an amendment made to the constitution of Sri Lanka by its new President. As usual, Sri Lankans took to Twitter to express their views, gratitude and objections to the amendment. 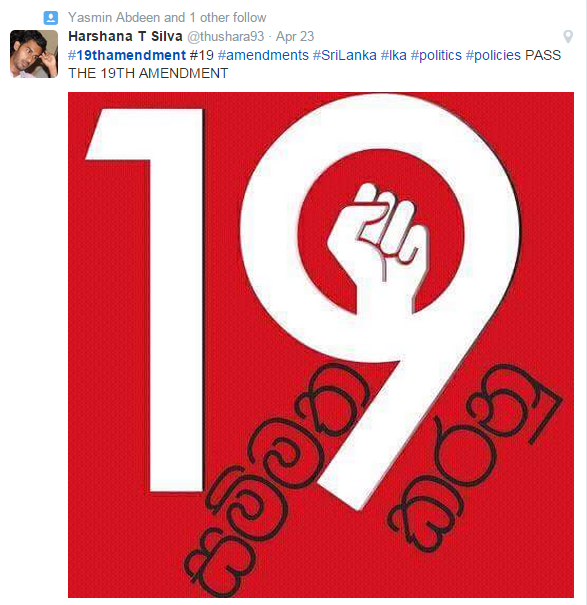 There are many things that are unique to Sri Lanka, some patriotic, some comical! As Sri

Lankans, when we see these, we feel that they are worth sharing since they in some way, form a part of Sri Lanka’s identity. #OnlyInSriLanka is such a hashtag that is used by Sri Lankans to share whatever they think represents Sri Lanka. 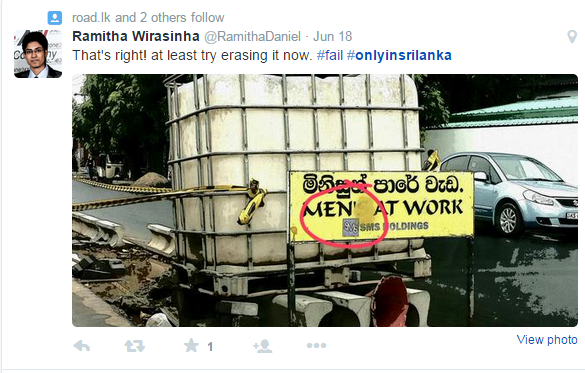 Have we missed any popular hashtags that are currently trending in Sri Lanka? Let us know in the comments.