What is Rapid Application Development (RAD) ? 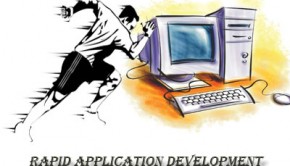 RAD stands for Rapid Application Development. Today in the technical world Rapid application development is a common thing, and it is a very popular software development methodology.

So what is this Rapid Application Development, and why are we using RAD when developing an application? If you are interested in this technology, or  if you are learning or currently in the IT field then this article will be worth for you.

RAD (rapid application development) is a concept that products can be developed faster and with higher quality. It also focuses on building applications in a very short amount of time. However on a negative note there is a high chance of critical errors / mistakes that arrive when developing an application rapidly, there fore the RAD approach is not appropriate to all the projects such as air traffic control systems, security systems, military systems, medical systems etc.

If you have seen the past application development records, you will be able to see that there were lots of failures happened because of a minor coding mistake. Some of the failures were plane crashes, shuttle crashes, etc. These errors / mistakes might not affect each and every project. Therefore, before you learn about RAD you must know them. This technology is most commonly used in iterative development and the construction of prototypes. Furthermore it has in the most recent time helped developers to work faster to develop systems that could be changed faster to meet changing client requirements, as with larger projects client requirements change before systems are even complete.

There are several benefits of using RAD in development including;

As with any process that involves speed there can be negative effects as well such as;

So what elements does RAD technology involve? Some of the most common types are mentioned below and are core elements relating to this technology;

Prototyping: RAD uses pre-defined prototyping techniques and tools to produce software applications. Prototyping helps to build more simpler, smaller versions of the project in short amount of time for either review, discussion or for proof of concept.

Iterative development: This refers to using short development cycles to create versions of the larger system or application. Therefore, in this stage we can divide a large chunk of work into smaller portions. Each cycle is a point of discussion or review for teams and can help to further improve the system going forward.

Time boxing: Time-boxing is used as a project planning technique. Time-boxing can help by putting of certain amount of features in a system for a later phase, thereby helping to speed up delivery of the current version of the solution. This however needs to be handled with care, as developers would not want to put the client’s most sought after feature to a later time when they expect it at a earlier phase.

Tool-sets: RAD systems provides a number of tools to help building the graphical user interfaces that would normally take a large development effort. RAD system uses tools such as Visual LANSA, Hyper Next, Alpha Five, Da DaBIK, Lazarus and My Eclipse among others.

Hybrid teams: Team members of a company using RAD need to have very broad, yet advanced knowledge in the different areas of application development. The team members must be able to take several different roles in order to complete the application. Most of the time RAD team include of professionals because they have to take decisions clearly and rapidly.